All pain is either severe or slight, if slight, it is easily endured; if severe, it will without doubt be brief.
Marcus T. Cicero,c. 106-43 BC, Great Roman Orator, Politician

As the saying goes, a picture speaks a thousand words and the charts below quite clearly illustrates that the Dow has not put in a single new high in the past 3 years. 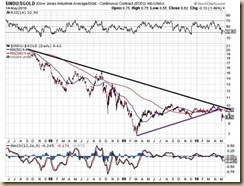 When the Dow is priced in Gold all we get is a long term down trend line. This clearly illustrates how the masses are being fooled into believing that these illusory highs are real highs. 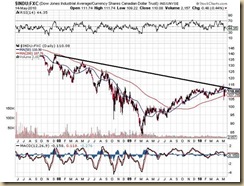 When the Dow is priced in Canadian dollars, we also get a similar picture though not as striking as when it’s priced in Gold. 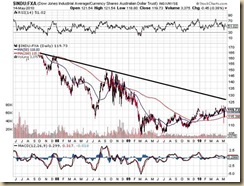 When priced in Australian dollars the picture is almost as striking as when it’s priced in Gold. These charts clearly illustrate the sinister nature of inflation; your wealth is literally being stolen right in front of your eyes.

Inflation the silent killer tax is being used to fleece the masses; you work hard for your money, you pay taxes and instead of getting a pat on your back you get a kick in the cahones. Welcome to the real world. The way to protect oneself from this insidious disease is to stay one step ahead of the central bankers. Precious metals are one way to hedge oneself, but they are not the only way and not always the best option. For example, from the mid 1990’s to 1999 the dot.com era was a good way to stay ahead of the inflation game, and then from 1998 to roughly 2006, real estate was a good bet, and so on. Given the rate at which new money is being created and the fact that many nations are reaching the point of no return in terms of paying back their debt, it would be extremely wise to have a position in precious metals (Gold, Silver, etc). In fact, having a position in any commodity is a good idea for the current commodity bull still has a long way to go before a long term top is put in.

You know the world is going crazy when the best rapper is a white guy, the best golfer is a black guy, the tallest guy in the NBA is Chinese, the Swiss hold the Americas Cup, France is accusing the U.S. of arrogance, Germany doesn’t want to go to war, and the three most powerful men in America are named Bush, Dick, and Colon.
Chris Rock Comedian

Posted by Tactical Investor at 7:32 PM