Dow, Gold, Copper and the Loonie

The first wave of selling has completed and the markets are racing upwards on very light volume; this is a very bearish development. Worse yet the Dow mounted one of the largest one day point gains in years this Monday and yet the volume was at best mediocre. A very clear signal that the smart money is selling into strength and not buying the crap that the economy has entered into a new paradigm. The problems of Europe have not vanished and we have a bank and real estate bubble brewing in China. Thus the potential to get hit from all sides is rather strong. 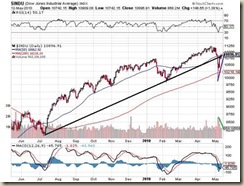 Rising volume, lower prices and rising prices and lower volume are both very negative developments. At this point of the game it appears that we are still not out of the woods.

Has also moved up strongly but it’s extended its gains when it is already trading in the very overextended ranges. The current pattern could produce more price gains but it is also a very dangerous pattern for when it reverses it could lead to very strong pull back. Caution is warranted in the short term.

Is still trading below 330; the longer it takes to trade to this level, the more likely the market is to mount a stronger correction. A failure to trade hold above the 330 ranges if they are tested again will lead to a drop to the 280-290 ranges.

It mounted a Relief rally; there is a daily sell signal in effect and more downside is expected before it trades to new highs.

Ulterior motive behind Greek Bailout, May 3, 2010

Posted by Tactical Investor at 12:08 PM