Precious Metals and the Dollar

Keep on sowing your seed, for you never know which will grow -- perhaps it all will.
Albert Einstein,1879-1955, German-born American Physicist 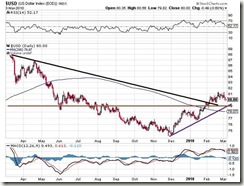 The dollar has rallied very strongly easily taking out the lower end of the targets we projected several months ago. It almost closed above 81 on a monthly basis. Had it done this, it would have made the outlook even more bullish. The dollar has gone on to put in series of new 9 month highs and thus by contrast one would have expected Gold and the other precious metals to do the opposite. However, this has not taken place. 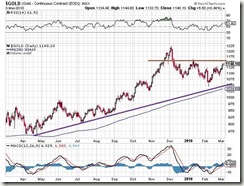 If we look at the chart of Gold, we see that while Gold went to put in a 9 month new high, Gold did not even put in a 4 month low. This is a very strong development and suggests that there is a very good chance that Gold could rally to the 1170-1200 range before pulling back. On the longer time frames, Gold flashed several strong intra market negative divergence signals; the most important two are mentioned below. .

The most impressive metal, however, is Palladium. The massive rally in the dollar has had almost no impact on the price of Palladium; it is still trading very close to its highs. If the precious metal's sector continues to hold up like this, one can expect it to literally explode upwards once the dollar rally fizzles out. From late 2008 to early 2009, when no one was paying attention to Palladium, we were strongly pounding the table on it. Palladium turned out to be the top performing precious metal last year and is still holding up a lot better than the rest.

Silver has taken the most severe beating so far and this breakdown could be (key word is could) providing an early warning signal.

Silver’s inability to trade past its 2008 highs strongly suggests that all is not well in the precious metal's sector, especially the gold sector.

2) The inability of the GDX, XAU, and HUI to trade to new highs when gold bullion surged to new highs

The potential for Gold (precious metals) to remain in a prolonged consolidative phase is still rather significant. The longer Gold trades sideways the more explosive the subsequent rally is going to be. However, there is the possibility that Gold could still mount a rather sharp correction if and when the Dollar surges past the 82 price point level.

A possible early warning of a longer correction/consolidation in the precious metal's sector will be given if the dollar can close above 81 on a monthly basis, or it can trade above 84 for 3 days in a row.

So far we have laid out the technical perspective for short to intermediate term rally in the dollar; our initial targets have already been fulfilled. It’s time to provide some fundamental reasons as to why the dollar is in trouble long term and why the precious metals sector and the commodities sector stands to benefit from these dollar woes.

1) The US has a massive current account deficit and it only seems to be getting bigger. The economist’s plays with numbers by stating that one month is less than the other and so forth, but the trend is up. It now comes close to 6% of our total economic activity.

2) The US needs to attract a whopping 1.8 billion dollars a day to compensate for the current account gap. This trend is simply unsustainable.

4) By inflating the money supply the government is imposing a nefarious silent killer tax on the masses. The only way to hedge against this outright theft is to hedge yourself by getting into hard assets (precious metals, lumber, oil, etc).

5) Our national debt is 12.4 trillion an increasing. However, this does not take into consideration all our unfunded liabilities such as social security and Medicare. If these are combined the Debt levels soar to well unimaginable levels.

6) 44 states are facing budget shortfalls. California is leading the way as it is expected to spend 50% more than it will generate this year. Now that is a really scary thought. Since 2007 US states have collectively spent 300 billion more than they have generated. These deficits means higher taxes and so far 33 states raised taxes but collections have plummeted to their worst levels in 46 years; you cannot squeeze water out of a rock. No jobs, means no revenues but states are selling new bonds at a record rate to raise funds; a recipe for a long term disaster.

7) Eventually the Feds are going to have to raise rates to continue attracting the huge amounts of money it needs to function. Overseas investors are going to start demanding higher rates. Higher rates will kill this fragile economy. Precious metals thrive in a high interest rate environment. From a long term perspective the bull market has only just begun.

The dollar has exhibited unusual strength; it simply refuses to correct, refusing to trade below 80 for any decent period of time. A close above 81 on a monthly basis will be the strongest signal that it could potentially trade to and past 90 before topping out. In the short term time frames, the Dollar is overbought and normally one would expect a pullback from current prices to roughly the 78 ranges. Gold, on the other hand is also picking up strength; this is clearly illustrated by its refusal to match the dollar by putting in a new 9 month low, instead it has gone on to put in a higher low.

On the longer time frames though Gold has still flashed several very strong negative divergence signals that need to be neutralized; two of these negative divergences were mentioned above. Thus the potential for Gold to correct/consolidate for several more months remains high, until off course the above signals are neutralized or a new buy signal is issued on the weekly time lines.

Right now Gold is holding up remarkably well In the face of a stronger dollar. If this pattern continues, then the next break out is going to be very explosive in nature; the dollar is not expected to mount a long term rally. Our long term outlook for the dollar is that it’s going to put in a series of new all time lows in the next 12-24 months.

From a long term perspective, all strong pull backs should be viewed as buying opportunities.

There are two ways of exerting one's strength; one is pushing down, the other is pulling up.
Booker T. Washington, 1856-1915, American Black Leader and Educator

Posted by Tactical Investor at 8:56 PM