Production, on the other hand continues to fall mainly owing to lower production by the two major players in this sector, Russian and South Africa. Production fell to 7.31 million ounces in 2008, a fall of almost 15%. Investment demand for Palladium climbed to 400,000 ounces in 2008, a rise of over 50%. ETF’s were the major players purchasing 370,000 ounces and demand via coins and small bars jumped to 30,000 ounces.

As of Feb 2010, the Palladium ETF PALL has 430,000 ounces of Palladium. This is a huge amount of Palladium; to put this in perspective consider the fact that it took the London ETF over 2 years to accumulate the same amount.

As stated below the demand for precious metals (Palladium, Platinum, Gold and Silver) is increasing at a voracious pace and the story below quite clearly illustrates this point.

Investments in precious metals such as gold, silver, platinum and palladium are in feverish pitch across China. No wonder, then, that the Chinese consumption of precious metals is dramatically going up, and up. China consumed 395.6 tonnes of gold in 2008 for jewelry and investment, reports the World Gold Council, or around 14% of global demand, up from 327.8 tonnes in 2007. In 2009, gold jewelry and investment demand in China is expected to reach 432 tonnes, compared with 422 tonnes from India.

On the derivative exchanges, China's Gold Futures trading volume hit 1.49 trillion Yuan in 2008. This is likely to double in 2009. Ditto platinum and palladium. Physical Chinese demand for platinum jewelry was at around 0.76 million ounces last year, accounting for 68% of the global total of 1.12 million ounces. The latest forecast sees that hitting 1.5 million oz in 2009, which even if it is a gross rather than net (of recycling) remains impressive. The Chinese jewelry demand for palladium increased from 15.5 tonnes to 20.2 tonnes, making palladium another hot commodity in China. Full Story

Now let’s take a look at the Technical picture. 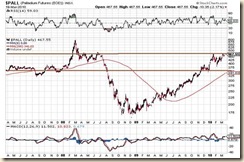 Palladium took a massive beating in 2008 and surrendered all its prior gains in a matter of months. However, this proved to be a buying opportunity of a lifetime, and we continuously pounded the table from late to 2008 to early 2009 and even went so far as to inform our subscribers’ that it had fallen into the screaming buy category. The term screaming buy is rarely used, and we only use it when we feel that we have spotted an investment that is extremely undervalued with incredible upside potential. From low to high Palladium surged well over 120% in a period of roughly 15 months; an incredible rate of return to say the least.

It broke through the 1st resistance point at 375 with relative ease and is now attempting to break past an even stronger zone of resistance. The $465-$475 ranges make up a zone of very strong resistance, and most likely it will take several attempts before palladium manages to break past this zone; once it does though it should be clear sailing to the 550-600 ranges. 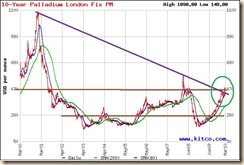 Palladium is now at a very important junction; it has just broken through the long term down trend line and is attempting to break out of a 10 year channel formation. Palladium will now need to trade past the 465-475 ranges for 12 days in a row. If it can achieve this, it will set up the base for a rally that could take it all the way to the 800-890 ranges. If we had to put a time frame on this, we would say that once it trades past the 456-475 ranges for the suggested period of time, it could hit these targets within 12-18 months.

The real bull market, however, will only begin when palladium trades past 1100. Taking an even long term view; a close above 1100 on a monthly basis and the ability to trade past this level for 15 consecutive days in a row, should lead to a test of the 1500-1700 ranges.

On our proprietary timing indicators Palladium has an open Buy signal on the daily, weekly and monthly time lines, so the long term outlook for this metal is rather bright. It is the only precious metal that went on to put in a new 52 week high in the face of a stronger dollar. More importantly it is also the only precious metal that did not issue a weekly sell signal at all during the dollar’s surge upwards; it momentarily issued a daily sell which has long since been neutralized.

The long term and the very long term outlook for Palladium is extremely bright. In the short to intermediate terms Palladium is due for some profit taking as it has mounted a tremendous rally in the past 15 months. Prudent investors would be wise to use any strong pull backs to add to or open up new positions in this metal. Investors will one day look back and view the current price as a bargain, do not make the mistake of looking out the window and wishing you had bought it. Now that you have the chance make sure you at least have a small position in it and use pullbacks to add to this position. While purchasing PALL might be one way to take a stake in Palladium, our preferred method of choice is Palladium bullion. Our bullion dealer of choice is Larry Labrode, our subscribers have dealt with him for years and his service and knowledge are simply outstanding to say the least. You can make contact with him at www.silvertrading.net

One who has imagination without learning has wings without feet.
Joseph Joubert, 1754-1824, French Moralist

Posted by Tactical Investor at 1:32 PM